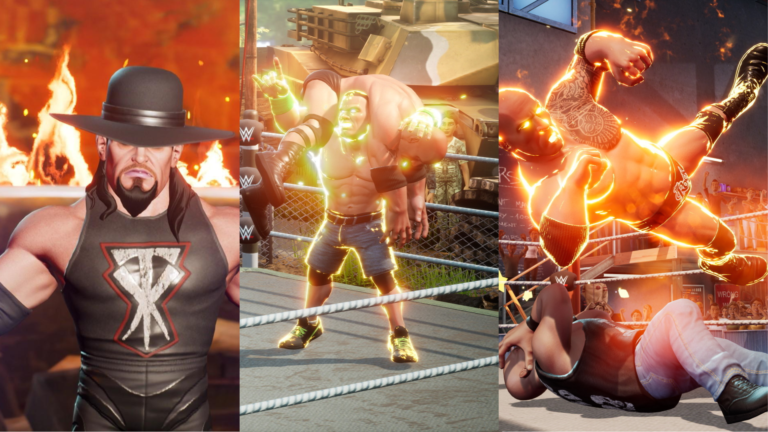 WWE 2K Battlegrounds is an entertaining and over-the-top wrestling game that offers a unique arcade-style experience. The game features a wide roster of WWE Superstars and Legends, as well as a variety of match types, including Steel Cage, Royal Rumble, and Fatal Four Way. The game’s control scheme is simple and easy to pick up, making it accessible to both wrestling fans and casual players.

One of the highlights of the game is its unique art style, which is more cartoonish and exaggerated than other WWE games. This adds to the game’s overall fun and wacky atmosphere. The special moves and power-ups also add a new level of excitement to the gameplay, allowing players to pull off some truly epic maneuvers.

The gameplay is fast-paced and action-packed, with an emphasis on over-the-top moves and special abilities. The game’s physics and collision detection can feel a bit inconsistent at times, but it doesn’t take away from the overall enjoyment of the game. The match types are diverse and fun, and the game’s tournament and campaign modes offer a good amount of replayability, giving players the chance to work their way up the ranks and become a champion.

In terms of presentation, the game’s visuals are colorful and vibrant, and the game’s commentary is well done, adding to the overall atmosphere of the game. The game’s soundtrack is also well done, featuring a mix of current and classic WWE themes.

Overall, WWE 2K Battlegrounds is a fun and enjoyable wrestling game that offers a unique arcade-style experience. It may not have the depth and realism of other WWE games, but it more than makes up for it with its over-the-top action and unique features. The game’s simple control scheme, vast roster, and diverse match types make it accessible to both wrestling fans and casual players, and the game’s create-a-wrestler feature and tournament/campaign modes offer a good amount of replayability. If you’re looking for an arcade-style wrestling game that’s packed with action and fun, then WWE 2K Battlegrounds is definitely worth checking out.

The legend of Tianding (GAME)